Best Feature Documentary: “Walk With Me: The Trials of Damon J. Keith” 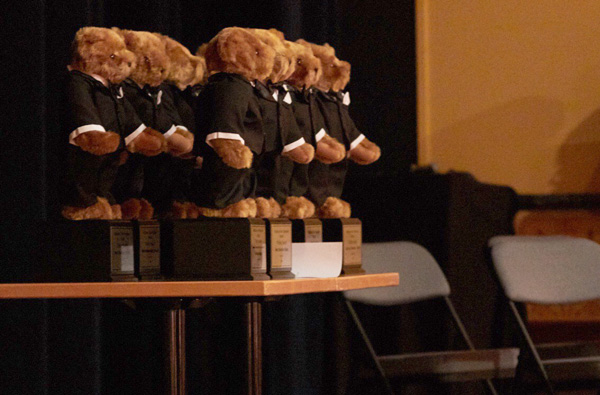 Custom-made by Festival sponsor Vermont Teddy Bear Company, the VTeddies represent the creativity and joy that are at the heart of the Middlebury New Filmmakers Festival. We hope that all our winning filmmakers will find a lovely spot for their bear.

The Middlebury New Filmmakers Festival is strongly committed to raising the profile of its winning filmmakers after the annual August event concludes. The New England Tour is the direct fulfillment of this commitment. This past March and April, our six VTeddy Award winning films from 2016 toured together throughout New England, appearing at great venues across the region. We thoroughly enjoyed bringing our 2016 winners to all these appreciative audiences and we’re looking forward to touring our 2017 winners next year.

The 2016 Festival introduced three new VTeddy Awards: “Audience Favorite – Feature”, “Audience Favorite – Short”, and “Best Integration of Music Into Film” in collaboration with the Vermont Symphony Orchestra. As part of this award, VSO will pair the winning filmmaker with a selected rising composer to co-create a new film with original music. A portion of that project will be ready for this year’s Festival and it will screen alongside a live VSO performance of the original score. Get your 2017 passes so you don’t miss the debut of this unique collaboration.

MNFF was also pleased to present special guest Barbara Kopple with a VTeddy for “Sustained Excellence in Creativity & Imagination,” which she accepted at the Closing Ceremonies on Sunday evening, August 28, at Town Hall Theater.

Congratulations to our winners – and stay tuned for updates on the New England Tour!