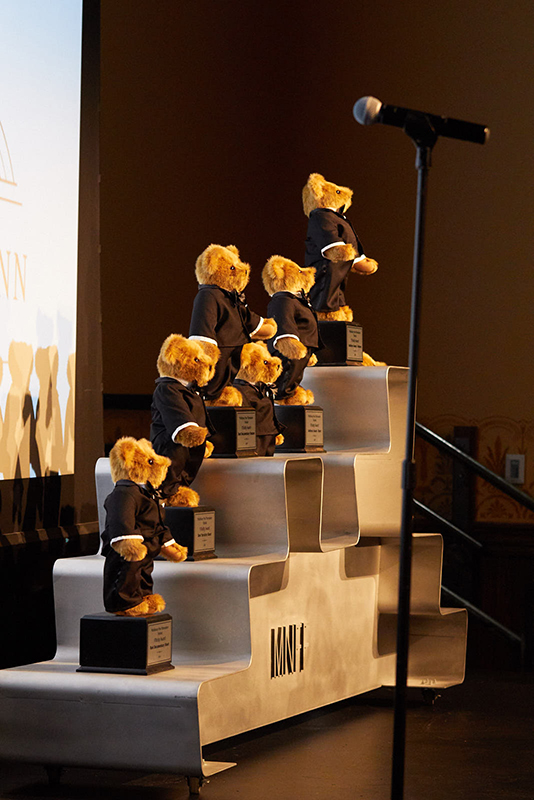 Custom-made by Festival sponsor Vermont Teddy Bear Company, the VTeddies represent the creativity and joy that are at the heart of the Middlebury New Filmmakers Festival. We hope that all our winning filmmakers will find a lovely spot for their bear in their hearts and their homes.

The 2018 Festival introduced another new VTeddy Award, with a $1,000 cash prize attached: the Gaia Prize for Environmental Filmmaking, endowed by a generous anonymous local donor. Returning for a second year: the Jacob Burns Film Center Creative Culture Award to a short film director, offering an opportunity to be in residence at the prestigious Jacob Burns Film Center in Pleasantville, New York and join the Burns’ ongoing Creative Culture film initiative for emerging artists; the Hernandez/Bayliss Prize [$1,000] to the feature film director whose work best captures the triumph of the human spirit; and the Clio Visualizing History Prize for the Advancement of Women in Film [$1,000], to a woman feature filmmaker who boldly explores a person or event of historical significance.

And back for a third year, the significant Vermont Symphony Orchestra Award for best integration of music into film, selected by the VSO and presented to a short film director at MNFF4. The VSO will again pair the winning filmmaker with a selected rising composer to co-create a new short film with original music.  Everyone hopes that the project will be ready for MNFF5 next August so that it can be screened alongside a live VSO performance of the original score. If this year’s screening of winner Robin Starbuck’s film, How We See Water with a simultaneous performance of an original score by Matt LaRocca by the VSO is any indication, this collaboration continues to evolve in exciting and highly original ways.

Congratulations to all our distinguished winners and honorees!

CLIO VISUALIZING HISTORY PRIZE FOR THE ADVANCEMENT OF WOMEN IN FILM

Visit our Film Archive to see the VTeddy Award winners from MNFF1, MNFF2 and MNFF3.