MIDDLEBURY — Organizers of the first-ever Middlebury New Filmmakers Festival (MNFF) have signed up a major new sponsor and have thus far received almost 200 film submissions for a four-day event that’s expected to attract upwards of 1,000 people to Addison County’s shire town for four days this August.

The new sponsor is Vermont Teddy Bear Co., which will, among other things, be providing custom-made VTeddy Award statuettes that will be presented to the winning filmmakers before the curtain comes down on the MNFF on Aug. 30.

“We are thrilled to have Vermont Teddy Bear lending its wonderful creative talents to this first edition of the Middlebury New Filmmakers Festival,” said Lloyd Komesar, producer of the inaugural MNFF. “(Vermont Teddy Bear) is creating for us, in conjunction with Town Hall Theater, a branding of our closing ceremony as the VTeddy Awards.”

Komesar made the announcement last Friday flanked by a several festival boosters and organizers assembled in front of Middlebury’s Town Hall Theater, which will host the MNFF’s closing ceremonies. Vermont Teddy Bear Co. CEO Bill Shouldice; MNFF board member, Middlebury College English professor and renowned author Jay Parini; and THT Executive Director Douglas Anderson also helped build anticipation for a festival that they hope will become a wildly successful, recurring competition that will showcase the creativity of first- and second-time filmmakers from throughout the country.

The festival will open on Aug. 27 at the THT, which along with the recently refurbished Marquis Theater and Middlebury College’s Dana Auditorium will screen submitted films until the awards ceremony on Aug. 30.

Eligible filmmakers have until June 15 to submit their work. Details for submittals, as well as everything else MNFF-related, can be found at middfilmfest.org.

“We expect 250 films to be in hand, from which we will select up to 60 to show during the three days of the festival,” Komesar said. He added there will be multiple parties and pop-up events throughout town, where filmmakers will go to speak about their work.

“Middlebury has a lot of beautiful little spaces, and we want to try to take the festival out of the theater and put it in all these locations so film-goers who come here have access to filmmakers above and beyond what you see on the screen,” Komesar said. 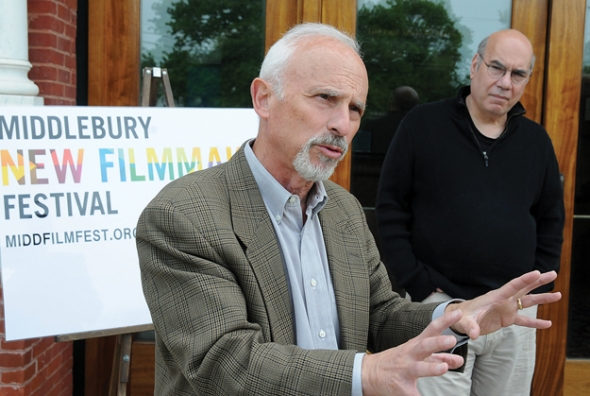 The participation of Vermont Teddy Bear is expected to provide the festival additional financial stability and a link to one of the state’s most successful and iconic enterprises.

“It gives us a wonderful lift; it’s great branding,” Komesar said. “It’s a fun, whimsical way to close the festival out after four days of hopefully great films, great entertainment all over town.”

Shouldice said it didn’t take long for the company to be convinced to hop on board.

“We are always looking for ways to get involved with our community,” he said. “When Lloyd made me aware of what he was trying to do, I think it was a matter of minutes into a lunch conversation that I committed to him that we would participate in some way. It was really important that it not just be cash. The important things for me was to actually have an impact and have a presence … right down to the design of the award.”

He described the VTeddy design as “iconic, yet statuesque,” to make sure that the bear stood out as being something substantial and important. VTeddy Awards will go to the three best feature filmmakers and three best short filmmakers, as determined by a panel of judges led by Vermonter Jay Craven, an award-winning director, writer and producer.

“We are happy to be a part of it,” Shouldice said. “We will be here throughout the festivities. It is one that we, as a great Vermont company, can give back and be a part of our community.”

Shouldice, former secretary of the Vermont Agency of Commerce and Community Development, added he believes the MNFF could become “a great opportunity, not only for Middlebury but for the entire state of Vermont. It is in its inaugural role this year, but it could be  a significant event in Vermont for many years to come. … We couldn’t be more happy to be a part of it.”

Town Hall Theater also became an eager player in the venture. The THT opened its doors seven years ago after a major fundraising campaign and the acquisition and renovation of the former town hall on Merchants Row.

“We have terrific projection facilities,” Anderson said. “I have been waiting since 2008 for someone to walk in my door and say, ‘I want to do something with film here at Town Hall Theater.’” 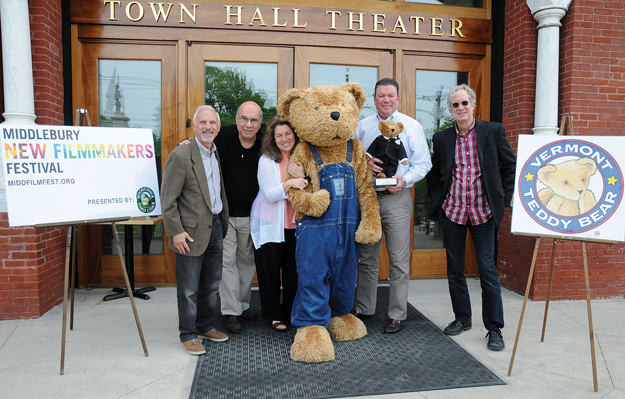 ORGANIZERS OF THE Middlebury New Filmmakers Festival, scheduled for Aug. 27-30, announced during a press conference last Friday that Vermont Teddy Bear has signed on as a sponsor and creator of the VTeddy Award statuette that will be handed out to winning filmmakers. Pictured are, left to right, festival producer Lloyd Komesar; festival board members Jay Parini and Gerianne Smart; Vermont Teddy Bear President and CEO Bill Shouldice; and Town Hall Theater Executive Director Doug Anderson. Independent photo/Trent Campbell

“(Komesar) sat down and rolled out this complete idea, something that would be fascinating to the entire community, with someone having the skills and experience to pull it off,” Anderson recalled. “We green-lighted this in about 10 minutes. It seemed like the perfect idea for us and the perfect time of the year for us. We are very excited about it.”

Parini believes the festival will be good for the college, community and state. A well-known writer, Parini is no stranger to filmmaking. He wrote “The Last Station,” a Robert Redford movie based on a Parini novel; and was producer on the Stanley Tucci film “Spin.”

Parini was enthusiastic about joining the MNFF board when he was asked by organizers. He is pleased with Middlebury College’s decision to become affiliated with the event.

“We’re obviously really interested in film and culture at the college, and this struck me as an ideal opportunity for the college to integrate with local businesses and major Vermont businesses, like Vermont Teddy Bear, and also with the Town Hall Theater,” Parini said.

“I wanted to get involved, because I saw an opportunity here for real participation of many sectors of Middlebury and Vermont to come together and celebrate a major cultural institution — filmmaking.”

“For us to give a platform to emerging voices in film — where they can be heard, discussed, discovered, propelled on to their next work — is really important,” Komesar said. “Looking at this long-term, we hope that Middlebury will become a place where new filmmakers will say, ‘We must show there.’”

Reporter John Flowers is at johnf@addisonindependent.com.