In this week’s installment of Filmmaker Forum, we called Caroline Guo, director of The Test which won the Audience Award for Best Short at the 2018 MNFF. Her directorial debut, The Test examines the moral dilemma confronting a young Chinese professor who unearths rampant cheating in her class. She decides on a course of action that threatens to undermine the entire school system and expose the tangles of deceit in her own life.

We chatted with Caroline to learn more about the film, her journey as a filmmaker, and how she managed to direct a pivotal scene through text messages.

How did your background in education lead to you to directing?

I actually majored in film in undergrad, but focused more on film theory. To me, film production was always kind of intimidating—I was more comfortable with writing, whether it was academic essays or screenwriting. So I continued with film studies for my Master’s, but then I realized I needed to stop studying and start working! I always wanted to live abroad, so one of the first jobs I got was being an English teacher. I didn’t imagine ever teaching but it just continued, and what I thought was going to be one year in Beijing ended up being five. That’s where I started getting back into film, and not so much with theory anymore, but more practical aspects of filmmaking. Then, it was actually through my teaching that I encountered the subject for my short film. The Test is based on a true event and cheating scandal that happened to a colleague of mine at the university we were working at. When she told me what had happened, I was shocked, enraged at the injustice of it… and thought it was an ideal subject for a short film. I was also considering leaving Beijing by the end of that year, so I thought it was now or never: I had to go for it. I definitely didn’t have the means to hire a director or anything, so directed it myself mostly out of necessity, and because I had a certain vision for it and wanted to inject some of my personal experience as well. But when I was directing, I realized that being in front of a classroom for years helped with handling all different sorts of personalities and situations!

You described your filmmaking as “guerilla style.” Can you tell me more?

All the scenes at the university were shot in one day, on location at the university I was working at and where the real-life event occurred, so first I couldn’t shoot any establishing shots to pinpoint the school. I had actually gotten “permission” beforehand to film in a classroom, but mainly because I sold it as an end of year activity I wanted to do with my students. It wasn’t a complete lie… all the students and extras were my actual students or my friends’ students, so that had to count for something! When we were shooting the classroom scenes in the morning we were kind of hidden, but when we had to shoot our hallway scene in the afternoon, we were caught on these security cameras. Someone from the security department came marching up and told us we had to stop right away. At that moment I didn’t let on that I was feeling this, but I was pretty sure it was over and we’d never finish our film.

So my producer and I went to this security office, and a short film in itself happened, with negotiations between different departments going on, berating each other, getting into this whole power struggle. I suddenly got the idea to act like my Chinese wasn’t that great so they’d be more lenient, and it worked! And in the end, it all came down to just filling out a form. Go figure.

It took over an hour to sort all this out, and during that time my producer, who was with me, was texting the situation to everyone in the cast and crew. She texted the DP to just shoot the scene. He texted back that he couldn’t shoot, the director’s not here! But luckily, they did finish setting up the shot while the security guys were all distracted, so once I made my way back up we were able to shoot the scene quickly before moving on to the next scenes. We managed to snag an office space last minute for the climactic clash between our two leads, but had to wait for the professors to finish their workday before we could begin any production design, and then finish the shoot while it was still daylight. We had a window of a little over an hour for all this. There was also really limited space so we had crew crammed in everywhere—behind the doors, underneath the desk, you name it. It was pretty hectic. I was also sure that after this day I’d be fired. But, miraculously, we managed to get everything done. And, I managed to keep my job!

You worked hard to keep the subject of the film secret from the university – so what is it like now, releasing The Test out to the world?

I’m nervous showing it every time, but I was particularly nervous showing it to my friend and co-worker that it was based on. I showed her right after we had finished and before I left Beijing, and I was moved to hear her say, “Oh wow – that’s my story.” One of my first reasons for making the film in the first place was I felt that it wasn’t fair that she was blamed and silenced for trying to do what she felt was right. So it was really meaningful to get good feedback from her, and to know that I was able to do her story some justice.

It’s also been incredible getting such great feedback from audiences here. There are quite a few references in the film that are particular to Chinese society and Beijing, so I wasn’t sure how they’d come across. But the response to it has been amazing, and just shows me how universal these issues are, both of cheating permeating all levels of society, and of this young woman and educator stuck under all this mounting societal pressure.

Any advice for someone who has found a story they want to tell through film?

I had studied a lot of film theory, but for practical aspects I was completely new to everything. I feel like there’s no way to fully prepare yourself besides diving off the deep end. That’s how I learned about filmmaking—by making a film. One thing that was really important was finding the right people. I was super fortunate in finding a cast and crew that was willing to jump on board and help out, passionate about the story being told, and all extremely talented and experienced. I definitely learned a lot from them, and having them there was a huge help. And as a director, since you’ll be working so closely with your DP, finding a DP that you align with is really important. When I met mine, we immediately knew we had the same vision, but I lacked the technical vocabulary in terms of camerawork, so he helped guide me in that respect.

Also, don’t be afraid of conflict with your team – as long as it’s productive conflict, it can bring out new ideas.

Where else has The Test screened?

Any parts of MNFF that you’d recommend?

MNFF was such a great experience. Meeting the other filmmakers and the MNFF team was amazing. I also loved staying with a host family, exploring Middlebury, seeing everyone’s films and taking advantage of all the screenings, panels and events. I do remember being exhausted, but it was worth it! Another big incentive for me to attend was how nice the acceptance letter was, offering events for filmmakers, host families, and ground transportation both ways from the airport to Middlebury—I also had great conversations with the drivers and filmmakers I was riding with. I would say, just be open and up for anything and everything MNFF has to offer, it’s a terrific film festival! 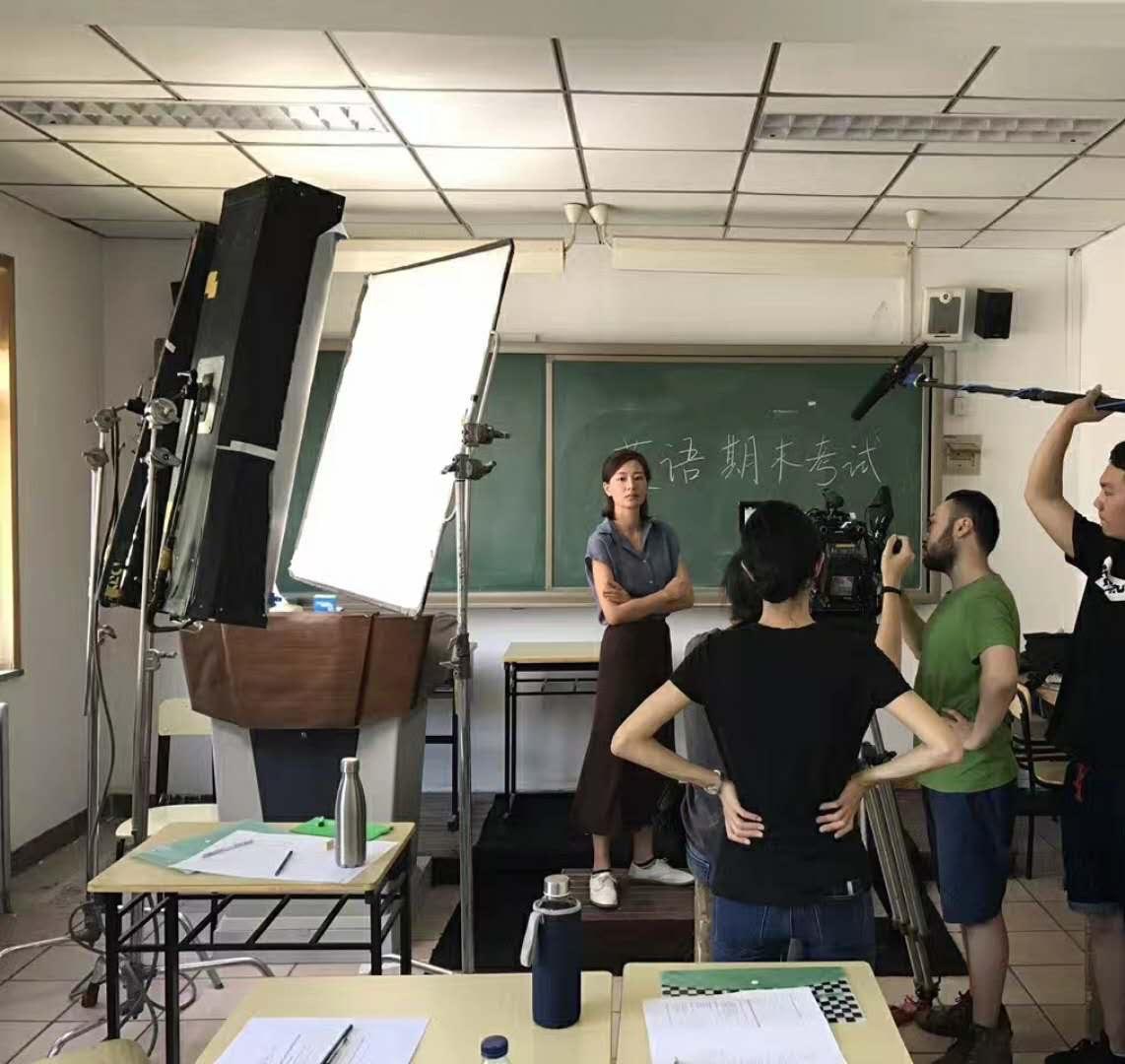 Caroline Guo and her team on set of The Test – this scene was shot immediately following their encounter with campus security.