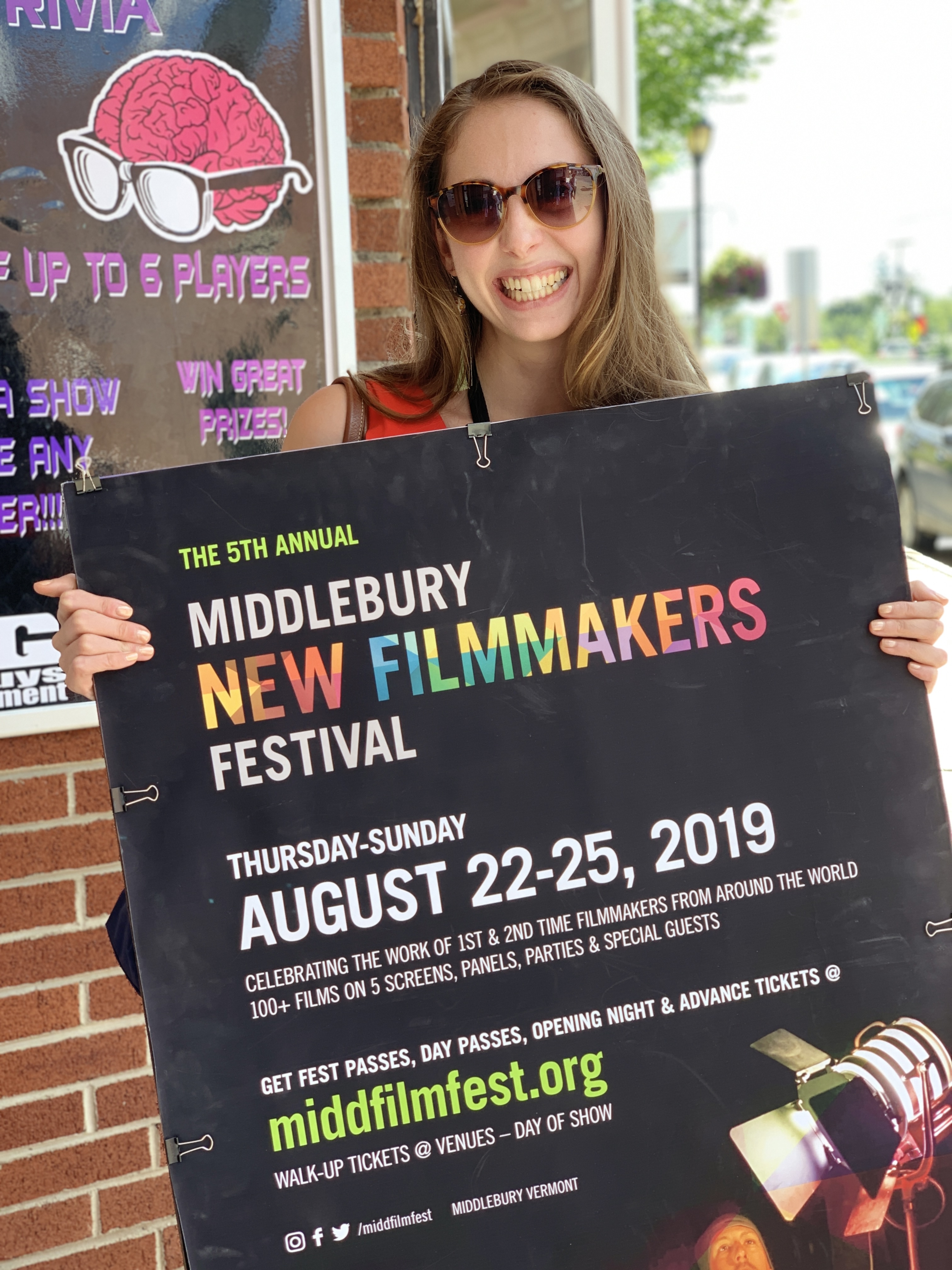 How did you spend your 20th birthday? Vermonters may recall a favorite swimming hole or ski slope. Perhaps a special meal? Charlotte Juergens, director of the MNFF5 doc Sunken Roads: Three Generations After D-Day, spent hers prepping for a trip to Normandy, the site of what would come to be her first feature film.

Sunken Roads follows Charlotte, the great granddaughter of a WWII vet, as she embarks on a pilgrimage with a group of D-Day veterans to retrace their route from WWII on the 70th anniversary of the invasion. When she’s not at work as an archival researcher at NBC News Archives, Charlotte can be found pondering the power of collective versus individual memory, the usual Tuesday musings. It’s no wonder her film was so deeply personal and so successful at MNFF this past summer. In fact, Sunken Roads landed the first ever distribution deal made at the Middlebury New Filmmakers Festival, through the Fest’s new relationship with acclaimed film distributor First Run Features.

We caught up with Charlotte Juergens to see what she and the film have been up to since the Fest, and to hear about her future with First Run.

MNFF: Coming off of the first ever MNFF distribution deal, what is next for Sunken Roads?

CJ: Middlebury did everything I hoped a festival would do. First of all, it was fun. I had an absolute blast and made real friends, people I hope to hang out with and work with. There wasn’t a competitive spirit among filmmakers. Beyond that, this distribution deal happened. The distribution deal with First Run Features is for the U.S. and Canada across all media. The first step is to pitch the film to theaters and get theatrical distribution. I hoped my film would have the potential for theatrical, but you never really know until you share it with audiences. The fact that First Run sees the film as one with theatrical potential is very exciting. I am so honored. Beyond theatrical, we are looking into broadcast, streaming, educational, and non-theatrical venues like museums. I’m particularly excited about educational and museums given my background in history academia and my past collaborations with the museum world.

My assumption was that I’d self-distribute, and that that would take over my life for the next few years. Working with a company like First Run, which I respect so deeply and admire so much, is exciting for many reasons. Everyone has priorities for their film. I believe in understanding what you want your film to do and judging your success by that metric. I wanted to preserve the stories of the people in the film and reach audiences that don’t normally engage with WWII or military history (namely, female audiences and young audiences who don’t feel spoken to by war documentaries). There’s a huge potential for emotional empathy across generations that’s often blocked. Making a film that could help build empathy in that way is important to me. Having audiences appreciate it is all the better!

MNFF: The film is deeply personal. Can you talk a bit more to your process and how you balanced your desire to experience this journey first hand while also making a movie for an audience?

CJ: We arrived at Normandy just after my twentieth birthday. Don, our main character, shared that his 20th birthday fell right after arriving there seventy years earlier to fight in the war. That parallel set a profound precedent that stuck with me throughout the shoot. I’m interested in the push and pull between collective and individual memory. How do we as institutions and individual people remember and come to terms with the past? With military docs, there is a big temptation to talk about which unit did which thing and which officer made what decision, incorporating the witness only when convenient for the filmmaker. I wanted Sunken Roads to be about people, an entry point for veterans and newcomers alike.

To speak to process, it took me a while to not judge my camera work by the degree to which it adhered to other people’s style. I didn’t fully realize that this was my film. Though tough at times, this mindset pushed me to be more ambitious with my camera work than I might have been otherwise at that point in my life [19 years old!].

MNFF: Is there one shot or moment in film that you return to?

CJ: The one that makes me personally emotional is the shot of Don and Suzette at the dinner table. Suzette doesn’t speak English and yet she intuits what Don is saying. You can see the love on her face as well as a bit of confusion. This image captures the core of the film: a desire to understand something that (at first glance) you can’t, to welcome people into a narrative they might not have experienced themselves. Suzette takes the emotional leap to understand Don. It’s beautiful.

MNFF: What are three films that influenced the making of Sunken Roads?

MNFF: What are three films you would recommend to viewers who enjoyed Sunken Roads?

CJ: Camera Person (directed by Kirsten Johnson), They Shall Not Grow Old (directed by Peter Jackson), and two MNFF short films—Dandelion Mum (directed by Barbara Hollan, which played with Sunken Roads at MNFF5) and Once and Again (directed by Isabel Dunn).