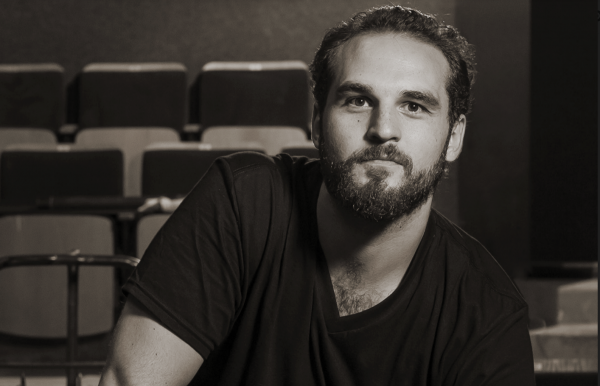 “Black Canaries” won the 2016 Vermont Symphony Orchestra “VSO” Award for Best Integration of Music into Film, which is granted to one MNFF film each year. As part of the award, VSO pairs the winning filmmaker with a Vermont composer who scores their next project. Kreitzer worked with local composer Paul Dedell and presented an excerpt of his work accompanied by a live performance from the Vermont Symphony Orchestra. This concert-screening took place at MNFF 2017 in Middlebury’s Mahaney Center for the Arts.

Kreitzer is now expanding on his documentary project, “Caregivers,” which explores the complex networks within Vermont’s aging and palliative care communities. MNFF sat down with Jesse to discuss “Caregivers,” the importance of building a creative community and the power of a renovated schoolhouse.

MNFF: Hi, Jesse. Can you tell us how your projects are coming along?

JK: Filmmaking is a lot of waiting. You build an infrastructure for something that is ultimately contingent on funding.

I’m about to go into 3 incubators, one with the Flaherty Film Seminar. Another organization I’m working with is the LEF Foundation, which finds New England based filmmakers. The National Arts Strategy Fellowship is another 6 month incubator I’m participating in. They choose artists who work at the intersection of art and activism. They are interested in art that has an effect on communities; I’m curious about how this curriculum will support Caregivers. I’m also excited to connect with other makers. Getting a sense of other people’s ideas can be a springboard for your own. That’s huge — getting out of your head and gaining perspective.

Onto filmmaking, I’ve been with Caregivers for over a decade. With this project I have to consider what it’s like to make a film about a sensitive subject. I’m still developing a way of working around different limitations. How do you make a sensitive film without compromising? It’s all about finding the right collaborators.

MNFF: What are your words of advice for filmmakers who might be coming across similar challenges of finding collaborators and a film community?

JK: It’s one thing to have grandiose ideas but another thing to articulate them into a vision and  written plan. Selling people on why the film matters and why it matters now is everything. Filmmakers can’t be afraid of public speaking. Think of all of the assets that make you and your story unique. Forget about filmmaking for a second. Think about the interests you have beyond film: your social, political and cultural background. How do these define you and the stories that you tell? Think about how these things can make a story. How does filmmaking support the unique interests that drive you?

MNFF: Speaking of what makes a filmmaker unique, can you talk about your relationship to music? You won the MNFF VSO award in 2015 for your short film, Black Canaries. Your films rely heavily on soundtrack in their storytelling.

JK: I regard myself as more of an audiophile than a cinephile. I don’t watch that many films. I constantly listen to music. I scout all sorts of music that relates sonically and thematically to my work. Music is the quickest way to get back to a certain tone or theme. The process of filmmaking is so long and it’s easy to disconnect. Music helps ground you. I think of myself more as a composer than an editor. I focus on tempo, pace, crescendo. How do you craft a narrative and build relief? Music is all about balancing suspense. I think of the process of filmmaking as a fine line between cinema and other arts. I rely on music more than anything.

MNFF: What was it like working with the Vermont Symphony Orchestra?

JK: VSO was an essential component for Caregivers. It was one of the strongest leveraging points to get the film rolling. VSO helped make the project more accessible. It gave the audience an opportunity to engage in a totally unique way. Seeing a film with a live orchestra is something you can only experience first hand. This cinematic experience distinguishes “Caregivers” and will help get this project off the ground. Wonderful program.

MNFF: Do you have advice for filmmakers attending MNFF this year?

JK: What an incredible opportunity this is for makers to come together and exchange ideas! MMFF is also a chance to explore Middlebury and Vermont. Maybe don’t even see any films. Be outside. Watch a few films and then please go explore. The sense of relief and reward with filmmaking is fleeting. The reward here is the opportunity to go places you never have been to before. Soak in what Middlebury and Vermont have to offer.