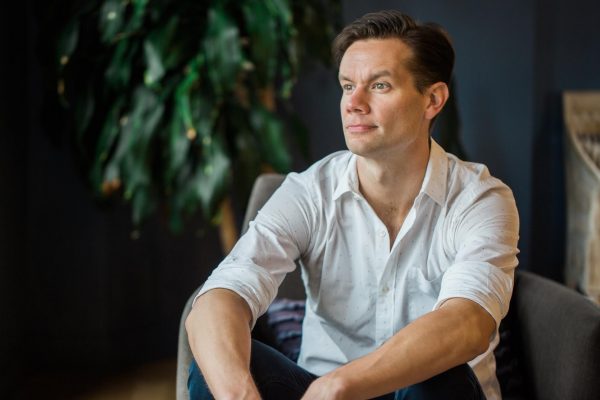 We caught up with Julian Dalrymple, director of I Was Here, a beautiful character-driven documentary short that won the 2018 Best Documentary Short at the 4th annual Middlebury New Filmmakers Festival this past August. We spoke with Julian about how he found his subject, Louis, what it was like to film someone knowing their death was imminent, and what it’s like to balance full-time work with creating his own projects.

How did you find Louis, and the story?

Louis was brought to my attention from an old college friend, Laura Relyea, who at the time was working on a piece about Louis for ArtsATL.com. When she told me about Louis, I was immediately captivated by him and the story he had to tell. Shortly thereafter, my director of photography and I made the trip from Chicago to Lexington, KY. I wasn’t sure what his place was going to be like and how he was going to be as a person, but upon our arrival we met a compelling and cordial person who was excited to share his art and his story with us.

What was it like to film someone when you knew they would pass before the film was complete?

I Was Here was a bit of an indirect follow-up to another short film I had made called The Best is Yet to Come where the subject of the film would pass before the completion of the piece. One of the main reasons I specifically got into documentary filmmaking was the interpersonal aspect between my subject and myself. However, I try not to let that relationship affect the story I have at hand. With that, I wanted to keep an emotionally safe distance from Louis and his partner. It’s difficult not to have an emotional connection with someone who is willing to open up to you and give you carte blanche to tell a story you deem is compelling. With that, it was difficult to see Louis decline. Less than a year after we sat down with Louis to interview him, we had a few additional pick up shots that we needed to get and his conditioned had worsened drastically. Had we put together a full-length film on him, it would’ve been that much more difficult to see him pass. Looking at Steve James’ Life Itself, it made me curious as to how he was able to put his relationship with Roger Ebert on the back burner.

Louis mentioned that art, for him, was a way of living on. What do you think of that idea, and did it play a part in the film?

Louis was an artist through and through. Outside of the archive, he amassed a large catalog of work in his short-lived life of photography, video, and paintings. Understanding that what you create has the possibility of living a life much longer than one’s own was certainly a motivating factor in his life as an artist and this was especially true in the last year and a half of his life. Louis was extremely immersed in his work and in his craft. Even days before he passed, he was, to the best of his ability, still archiving. I’m inspired by those that have this uncanny ability to get locked in with what they were doing and Louis was no exception.

I’d like to think that we put a bit of ourselves into the work that we create. You want to create a voice. You want to be known. Even after one’s demise, you want to leave something as a testament to your very existence. Granted, it won’t matter once you pass because you are fucking dead, but the very notion that one’s work will outlive one’s own very existence can be a motivating factor in the creation of one’s work.

What were some of the challenges you faced when embarking on the project, as it was among your first independent projects?

Having a full time job and proximity were two issues in regards to this project. My DP and I had to be judicious about not only our time but Louis’s time as well. It was never as simple as setting up time to film him because we were never certain what his condition would be like. So when we did make the time to make the haul from Chicago to Lexington, things just fell into place. As the old say goes, luck favors the prepared (or something to that affect!)

Death and mortality seems to be a running theme in your work. Can you tell us about your past and upcoming projects and how, if at all, they played a part in this film?

In some ways, this film was an indirect follow-up to my last short. Like the short before, I found myself in a situation where the subject at hand would not see the completed project due to his mortality. That’s a really fucked up thing to have to explain to someone, yet Louis and my subject before that were very understanding. Yet their words were able to breath life into what I was editing. It gave the film a stronger sense of coherence. Granted, I am saying this after the fact that they passed away, but it wasn’t until after their passing that the film took on a different form. They stayed true to their convictions until the very end.

My follow up will also be about death, but I will leave it at that. It may very well be an end to an unintentional trilogy.

Do you have any words of advice to filmmakers embarking on their first project?

Despite the horrendous funk of cow manure that wafted through Middlebury, I was utterly charmed by the city of Middlebury, the film festival, the patrons, and the residents of Middlebury. It certainly won’t be last visit there! I cannot thank everyone enough for some a memorable extended weekend including Lloyd Komesar, my host Johanna Nichols, Isabel Merrell, and many of the other filmgoers that I was able to speak to while I was there.

I just noticed that my last words were almost a play on the title of my film. That wasn’t intentional!